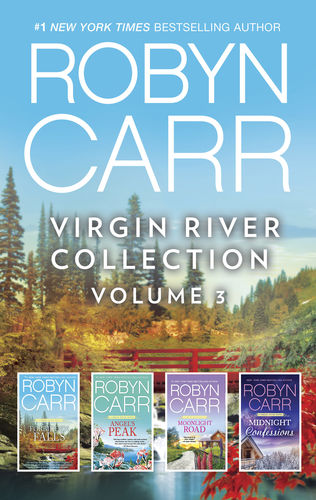 Reverend Noah Kincaid moved to town to reopen an abandoned church, and the young widower finds an unusual assistant in brash and beautiful Alicia Baldwin. Noah and Alicia are an unlikely team to revitalize a church, much less build a future. The couple has so many differences, but in Virgin River anything is possible, and happiness is never out of the question.

Sean Riordan has settled down in spite of himself—he’s not the cocky young fighter pilot he was when Franci Duncan left him four years ago, and he wants them to try again. After all, they have a history. But that’s not all they share… Franci’s secret reason for walking away when Sean refused to commit is now a toddler. News travels fast, and soon the whole town is taking sides. Rebuilding their trust could take a small miracle—and the kind of love that can move mountains.

Erin Foley is hitting the pause button on her rat-race life and holing up in a secluded cabin. Her plan is to get to know herself…not the shaggy-haired mountain man she meets. Beneath his faded fatigues and bushy beard, Aiden Riordan is a doctor, recharging for a summer after leaving the navy. Erin seems determined to keep him at arm’s length, but he’d love to get closer—if his scruffy exterior and crazy ex-wife don’t hold him back. But there’’s something in the water in Virgin River, and unlikely romances tend to take root…

Drew Foley and Sunny Archer are each visiting Virgin River for the holidays. Sunny was dumped at the altar the previous New Year’s Eve and is in no mood to celebrate. But she’s dragged along to the party at Jack’s Bar. Drew, getting over his own heartbreak, sees Sunny across the crowded room and he’s instantly smitten. As the townspeople gather, two lonely revelers decide the best balm for their broken hearts might just be ringing in the new year with a special midnight kiss.