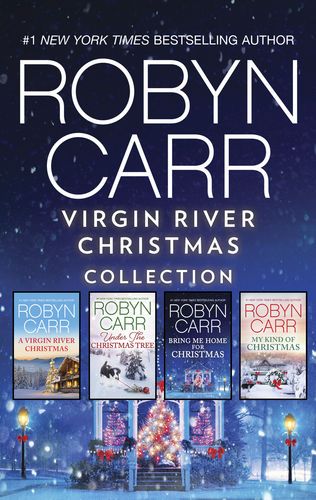 Celebrate the season in Virgin River! Together for the first time, every Christmas story set in the fan-favorite small town—four stories in one value-priced complete box set, only from New York Times bestselling author Robyn Carr.

Marci Sullivan is on a journey to find the man who gave her three extra years with her late husband. Veteran Ian Buchanan doesn’t know what to make of the determined young widow who forces him to look into his painful past and the uncertain future. But it is a season of miracles and maybe, just maybe, it’s time to banish the ghosts and open his heart.

When the townfolks discover a box of adorable puppies under the town’s Christmas tree, they call on local vet Nathaniel Jensen for help. But it’s his budding romance with Annie McCarty that really has tongues—and tails—wagging!

When Becca Timm crashes her brother’s men-only hunting weekend, an accident turns her impromptu visit into an extended stay, and she finds herself stranded with Denny Cutler, the guy who broke her heart. As the power of Christmas envelops the little town, Becca discovers that the boy she once loved has become a strong and confident man. And the most delicious Christmas present she can imagine.

Angie LeCroix wants to spend Christmas in Virgin River relaxing, away from her well-intentioned but hovering mother. Yet instead of freedom, she gets her uncle, who would prefer she never go out at all. And certainly not with navy pilot Patrick Riordan. But Angie has her own idea of the kind of Christmas she wants—and the kind of man. Patrick and Angie thought they wanted to be left alone this Christmas—until they met each other. Now they want to be left alone together. But the Sheridan and Riordan families have different plans for Patrick and Angie—and for Christmas, Virgin River style!