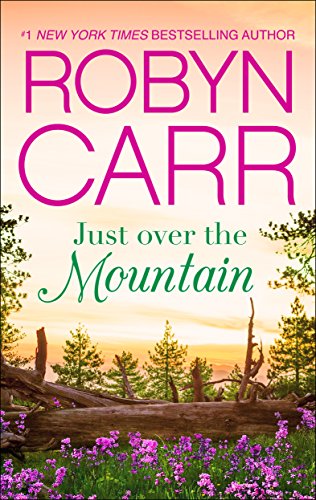 Just Over The Mountain

Welcome back to Grace Valley, California, where the best things in life never change…

Here in this peaceful community, folks look out for one another like family, though sometimes a little too well. In a town like this, it’s hard to keep a secret—but Dr. June Hudson has managed to keep one heck of a humdinger….

Though visits from her secret lover, undercover DEA agent Jim Post, are as clandestine as they are passionate, somehow it fits with her demanding schedule as the town’s doctor—a calling that requires an innate ability to exist on caffeine, sticky buns and nerves of steel.

But how can a secret lover compete with a flesh-and-blood heartthrob from her past? June’s old flame has just returned to town after twenty years—and he’s divorced. June is seriously rattled. So when the town’s most devoted wife takes buckshot to her husband and some human bones turn up in her aunt Myrna’s backyard, she’s almost happy for the distraction.

Sooner or later, love will have its way in Grace Valley. It always does.

June Hudson had nerves of steel. She was thirty-seven years old, had been the town doctor in Grace Valley, California, for over ten years and the things she’d been called upon to do were not for the faint of heart. June had delivered a baby in the back of a pickup truck, kept a logger’s severed limb on ice waiting for the emergency helicopter and had given calm, intelligent medical advice while looking down the barrel of a marijuana farmer’s gun. Oh, she was feminine enough, but tough. Strong. Fearless.

Maybe not fearless, but she had certainly learned how to appear fearless. She had learned this in Omnipotent Physician 101.

Then came an early morning phone call bearing portentous news that caused her heart to race and her brow and upper lip to bead with sweat. All the strength bled out of her legs as she sank helplessly to the kitchen stool.

The conversation started out innocently enough with her friend Birdie reporting, “Chris is coming home with the boys.“ Chris was Birdie’s son, the boys her twin fourteen-year-old grandsons.

“For a visit?” June half asked, half assumed.

“For good, he says. He and Nancy are divorcing.”

“He asked if you were still single,” Birdie went on, a lilt to her chipper voice. A hopeful little lilt.

That was when June the Fearless began to tremble and quake. Chris was an old boyfriend. In fact, her first love. Also her first and most terrible broken heart. Chris Forrest was the man June always vowed she would tie up and torture for the agony he had brought to her youth.

The only son of Birdie and Judge Forrest, Chris had lived in southern California for eighteen or so years, married to another high-school friend—or rival—Nancy Cruise. He had only returned to Grace Valley for visits a few times; his parents enjoyed their trips to his home in San Diego. During his rare appearances, June did her best to avoid him. When she did happen upon him, she was as cool as a cucumber, aloof and detached. Her posture and expression said that bygones were bygones, that she rarely even thought about him.

It was partly true. She didn’t spend a great deal of time mooning over a twenty-year-old romance gone awry. On the other hand, whenever she saw him, she was instantly reminded of two things: right after high school he had dumped her for Nancy without explanation or apology, and his boyish good looks had not deserted him. She hated him on both counts.

And now, divorced, he wondered if she was available? Hah! In your dreams, Chris Forrest, she thought with the long-lasting venom of a lover scorned. She made a little small talk with Birdie, who was quite naturally excited by this turn of events. After hanging up the phone June remained on the kitchen stool, dazed, her thoughts concentrated mainly on planning Chris’s slow death. Then the phone rang again.

“Chris Forrest is moving back to Grace Valley,” her father, Elmer, reported.

“Really?“ she faked. ”Birdie and Judge must be delighted.“

“Seems he split with Nancy and has custody of his kids, which I suppose makes sense, them being boys and all.”

“I didn’t mean that part was nice,”June said. “Him coming back here with sons. That’s nice. Especially for Birdie and Judge.”

“Does that put a little flush in your cheeks?” Elmer wanted to know. “Him being single again?”

She felt her cheeks, which were aflame, but not with the heat of passion. Could her father actually imagine she’d welcome the lout back into her arms? “Certainly not. That was a childhood thing. I’ve been over that for a couple of decades now.”

“That so?” Elmer wanted to know. “Meat loaf tonight at your place?”

“Dad? Did you happen to hear when they’re coming back?”

“I believe Judge said right away, as Chris wants to get his boys signed up for school. So…meat loaf? It’s Tuesday again already.”

“Right away?” She absently touched her hair, still damp from the shower. She’d never been good at things like hair. She could get an inflamed appendix out in no time and leave a scar that would be the envy of a plastic surgeon, but her dark blond, shoulder-length hair—or dishwater blond, as her mother used to call it—was beyond her understanding.

June looked at her hands. Doctor’s hands. Short nails, pink knuckles from scrubbing them dozens of times a day, and…what was that? An age spot?

She had heard that Chris, Nancy and their boys belonged to a country club.

“You okay, June? You sound awfully tired. You go out on calls last night?”

She heard a familiar alarm from her bedroom when her pager, set to vibrate, began dancing around on top of the bedside stand. Grrrr. With the cordless phone at her ear, she dashed to get it. “No, I wasn’t called out at all. It was a quiet night. Oops, gotta go, Dad. I’ve got a page. See you later?”

The pager revealed the number for the police department, with a 911 attached to indicate an emergency. Chris Forrest disappeared as June went into a different mind-set and dialed. “June here,” she said.

Deputy Ricky Rios had paged her. “Chief Toopeek responded to a call about a shooting at the Culley stables, June. Said he needs you out there as soon as possible.”

“Is Tom calling for the paramedics or a helicopter?” she asked while slipping on her shoes.

“He just asked for you,” Ricky said.

June grabbed her bag and a clip for her damp hair, whistled for her collie, Sadie, and was out the door in under fifteen seconds. She was on call, a service she shared with John Stone, the other Grace Valley physician, and therefore drove the town’s new ambulance. It was so new that it still intimidated her, and though she turned on the lights and siren, she didn’t drive any faster than usual. It was early morning; she didn’t want to hit an animal or round a curve in the road and slam into slow-moving farm equipment.

Even though June now had a radio at her disposal, she didn’t use it to contact Tom Toopeek to ask about the shooting, because many of the citizens in Grace Valley also had radios. It was like a big party line. Of course, with the way everyone minded everyone else’s business in the town, she might as well get on the radio and give them a heads up. They’d have all the details by lunchtime anyway.

Daniel and Blythe Culley lived in a medium-size, ordinary ranch house on acreage large enough to support two stables that were by no means ordinary, five corrals, and still provide plentiful grazing land at the foothills of the Coast Ranges mountains. Horse people from Kentucky, they had started out small but a decade or so back they’d had great success with a stallion racing in San Francisco and San Diego, and the reputation of the stable had soared. Boarders, breeders, trainers and sometimes racers, they employed as many as twenty hands, depending on how many horses they had in residence. Clients came from everywhere and the Culleys were kept busy year-round.

June didn’t speculate much on what might have happened. Nearly everyone in the valley had guns, especially if they lived in the country and had to contend with wildlife. One of the hands might have had a mishap or, less likely, a disagreement that led to a showdown. Rushing to the stables, she thought abstractedly about the Culleys and the kind of people they were—salt of the earth. It came to mind how happy and devoted a couple they had always been. Quiet, but friendly and helpful. They kept to themselves, since building up a stable of some repute required backbreaking commitment. Farmers, ranchers, vintners, loggers and the like worked from dawn to dusk, slept hard and worked more. A strong partnership, a strong marriage, like what the Culleys had, was required. June thought it such a pity that they hadn’t had children to raise on their land. They’d have made admirable parents.

Although it was now 7:00 a.m., the tall trees caused the sun to slant weakly into the yard and an eerie cloud of fog lingered in front of the house. Tom’s Range Rover was parked about a hundred yards from the house and he stood beside it, his rifle balanced in a nonthreatening way upon his right shoulder. A barrel had been tipped onto its side and Daniel lay over it, his pants pulled unceremoniously down to his thighs, his buttocks, freckled with buckshot, catching the cool morning breeze.

“Daniel, what the heck…?” she began, getting out of the ambulance with her bag in hand. “That old woman’s lost her mind,”he said.

“Blythe did this to you?”

“You know any other crazy old woman out here?” he wanted to know.

“Well, I—” First of all, she thought, they’re not old. Blythe was around fifty-five, Daniel maybe a little bit older. It was hard to tell. They were a young couple when they’d moved to Grace Valley, and June hadn’t had occasion to treat either one of them. That in itself had never been curious to her until that moment. Why would they travel to another town for their medical needs? Had they not trusted her father, Elmer, the town doctor before her? They were quite friendly with Elmer. Perhaps, unlike most of the townsfolk, they didn’t want a doctor with whom they were well acquainted.

“Where is Blythe?” she finally asked.

Tom, not uttering a word, tipped his rifle slightly in the direction of the house. There, through the morning mist, June could see Blythe sitting in a rocking chair on the porch, the gun lying comfortably across her lap.

“Have you talked to her?” she asked Tom.

“Just from a safe distance. It appears she needs a little time to think about things.”

“You let that woman think much longer,” Daniel said, “she’s likely to stomp down here and put the muzzle to my head, which I should have had examined about thirty years ago for getting into this bargain.”

June looked at his pocked, inflamed backside. “I’m going to have to take you to the clinic, Daniel. We’ll need some antiseptic and bandages…and nice, fine tweezers. But you’ll be all right.”