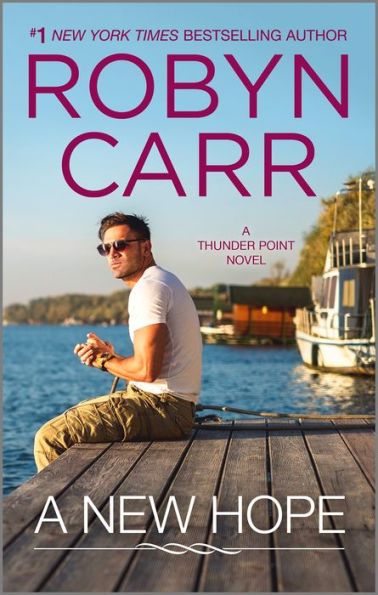 Welcome back to Thunder Point! Rediscover the fan-favorite small town where newcomers are welcome and friends become family, only from Robyn Carr, the #1 New York Times bestselling author of the Virgin River series.

Since moving to Thunder Point, Ginger Dysart is finally getting past her grief. Her job at the flower shop is peaceful and fulfilling, and she’s excited to be assisting with the Lacoumette wedding.

In spite of her lasting heartache, Ginger is swept up in the pleasure of the occasion. But the beauty of the Lacoumette farm and the joy of the gregarious family are ruined by an unfortunate, embarrassing encounter with the bride’s brother, Matt.

When Matt shows up at the flower shop determined to make amends, what started out as a humiliating first meeting blossoms into something much deeper than either of them expected. Everyone around them worries that Ginger will end up with a broken heart yet again. But if Ginger has the courage to embrace the future, and if Matt can finally learn to let go of the past, there may still be hope for a happy ending.

Chapter One
The Basque really know how to get married, Ginger Dysart thought. She hadn’t attended the wedding ceremony and had had doubts about attending this reception, given all the sadness she’d suffered over the past year. Her own marriage had barely begun when it ended in divorce. But she was so glad she’d come to the reception. It was an ethnic extravaganza—the Basque food, the music, the dancing. The bride and groom, Scott and Peyton Grant, had whirled around the dance floor a few times, then parted so Scott could dance with his mother and Peyton could dance with her father. And then there was a series of handsome dark-haired men who claimed the bride—brothers, cousins, uncles.

Paco Lacoumette presided over the party with all the aplomb of a king and was clearly in his element. The couples dancing would cease, and the Basque men in their traditional dress of white with red vests and caps would take the floor and put on a show to the wild applause of the guests. Then more couples dancing. Even Ginger was dragged from her chair and pulled out to dance, despite her efforts to decline. She danced with men she knew—Cooper, Spencer, Mac, Scott—and men she didn’t know, those good looking Lacoumette relatives. At one point she spied Troy, Grace’s boyfriend, who must have just arrived. Grace, Ginger’s boss and owner of the flower shop in Thunder Point, had believed he wasn’t going to make it and was so disappointed, yet there he was, twirling Grace around with almost professional skill. And by the glowing look on Grace’s face, she was completely thrilled!

Wine flowed, food was constantly replenished, dancing and laughter filled the night. Ginger felt pretty for the first time in so long. She wore a new dress, cut to her slim figure. She’d lost a lot of weight in the last several months; men were looking at her in a way they hadn’t before, and she actually enjoyed the feel of their eyes on her. Those lusty, dark-haired Basque men did nothing to conceal their appreciative gazes.

The whole atmosphere was magical—teenagers were dancing or dashing about the grounds and orchard, sneaking behind trees for stolen kisses; children were riding on the shoulders of fathers, grandfathers and uncles; women were clapping in time to the music, laughing, singing, gossiping. Peyton and Scott were in much demand on the dance floor and in between songs many toasts were made. There were far too many Lacoumettes to remember all their names, but they made her feel welcome and appreciated.

There was one darkly handsome man she’d noticed right away, because he was the only one who seemed sulky and unhappy, and he was the one approaching her now as she stood beside her table. He had the swarthy good looks and fierce eyes of a pirate or maybe serial killer. And with such precision timing, he had singled her out when everyone else from her table was dancing.

“Hey, pretty lady,” he said, attempting a smile that was off kilter. His words were slurred. That would at least partially account for the half-mast eyes and pouting expression—he was obviously drunk. Well, this happened at weddings with great regularity, she thought, especially weddings where the wine flowed so liberally.

“Thank you, but I’m going to sit this one out,” she replied.

“Hm,” he said, stroking his chin. “Then we should go straight to the hayloft!”

She was appalled. But she remained composed and confident. “I’m sitting that out as well.”

“No, come with me,” he said. “You and me—let’s do this.” And then he reached for her. And grabbed her right breast.

She shrieked, shoved him away. His feet got tangled, he fell backward over a chair and went down, hitting his head on the way. And there he lay, motionless and unconscious.

She got far more attention than she wanted or expected. And of course, there were the questions. What happened? Are you hurt? Did he pass out? Is he dead?

“He grabbed at me,” she said, waving a hand over the area of her breast without pointing or saying it. “I shoved him away, and he fell, and I think he might’ve hit his head on the table.”

There he lay in a heap, on his back, his legs twisted awkwardly.

In just seconds Peyton and Scott were there, Scott crouching and lifting the man’s eyelids, looking at his eyes. “Well, they’re equal, but damn … they’re big. Does he take anything?” he asked his bride.

“Yes, wine,” Peyton said. “He killed a full skin before the dancing.”

Then Paco was pushing his way through the crowd, looking down. “I knew it would come to this,” he said. “There was no slowing him down.”

“His head is made of wood,” Paco said. “It would serve him right, to be carried out of his sister’s wedding on one of those back board things and spend the night in a hospital.” Paco reached for the ice bucket on the table. Everyone scooted back immediately, as if they knew what was coming. Peyton pulled Scott away while Paco took a bottle of white wine out of the bucket, put it on the table and doused the man with the ice water.

He sputtered and coughed and sat up.

“See what I’m telling you?” Paco said. “Wood. George! Sal! Mikie! Get Matthew from your sister’s wedding! Hide his keys!” Three men moved to action immediately. Paco looked at Ginger and said, “There’s always one. I apologize.” Then he took in the gathering crowd and clapped. “I think it’s time I dance with my wife!”

Grace arrived, pushing her way through the crowd. “Ginger! Is everything all right?”

“I’m not sure,” she said, watching as the men were leaving—three of them walking steadily and one weaving dangerously.

“My brother, Matt,” Peyton said. “He has issues. Divorce issues. He was divorced a little over a year ago, but it appears he’s still very bitter. Weddings don’t seem to bring out the best in him. He didn’t hurt you, did he?”

“He didn’t quite connect,” Ginger said. “I was about to say good night anyway. I’m going back to my folks’ house in Portland for the night.”

“Just enjoy the rest of your party,” Ginger said. “No harm done. To me, anyway. God, I hope I didn’t hurt him.”

“You heard my father—his head is made of wood.”

“I’ll call you in the morning,” Grace said. “Troy had some car trouble on the way up here, and we’ll have to see where that stands in the morning and figure out how we’re all getting home. I’ve got the van, you take your father’s car back to him.”

Ginger turned to Peyton. “It was a wonderful reception. You look ravishing. And I was just thinking, the Basque people really know how to get married.”

*******
Ginger’s parents, Dick and Sue, had waited up. That was definite evidence as to how concerned they were about her—they stayed up past ten when their usual bedtime was before nine. And when she walked in the front door, looking perfectly alive, they both stood from their recliners. They looked at her expectantly.

“Did you have a good time?” Sue asked hesitantly.

“I had a lovely time,” Ginger said. “The flowers were beautiful, the wedding party was gorgeous and the party was like out of a fairy tale. You wouldn’t believe the fun of Basque dancing and music! And the food? Oh my God, the food was just amazing. And I’m exhausted—I’m going straight to bed.”

“Are you … comfortable in your room, Ginger?” Sue asked.

“Yes, of course. And thank you for making it so nice for me.”

She kissed them both on their cheeks and went upstairs. Upstairs to the large bedroom and adjacent room that had been renovated especially for her when she came home to her parents, pregnant and alone; to the room where she had cared for her little son for the four short months of his life.

Ginger had been staying with her cousin Ray Anne in Thunder Point for the last month. It was through Ray Anne that she’d gotten the job in Grace’s flower shop, a job that was really saving her life, hour by hour. Before she came back to Portland with Grace for this wedding and weekend visit, Ray Anne had called Sue and asked her to pack up all those baby things that Ginger had been looking at since his death over nine months ago. The crib and mobile had been taken down, the clothes removed from the drawers, boxed up and stored, the necessary accoutrements like car seat, bouncy chair, bath items and changing table were all gone. She didn’t think her parents had given them away, but they were out of sight. Probably stored in the attic or garage. There was only one framed picture of Ginger and Josh that she found in the top drawer.

She took it out, put it on the bedside table, and changed into her pajamas.

When her father had suggested, rather emotionally, that Ginger go to Thunder Point and stay with Ray Anne for at least a few weeks, she had not wanted any part of it. But it was plain to see her parents needed a break from her grief. Now she was so glad she had gone. When she was in Thunder Point, she at least had the illusion of getting on with her life. She had a new, improved appearance, at Ray Anne’s insistence. She had that lovely little job in the flower shop. She had slept well and had an appetite again. Oh, she’d longed for little Josh, like always. But she was marching on.

She crawled in the bed at her parents’ house, turned the picture of herself and her baby toward her, left the light on so she could see it, and sobbed.

“A touching romance that adds another chapter to Carr’s engaging series that hovers at the borders of women’s fiction and romance and is sure to appeal to fans of both.” –Library Journal