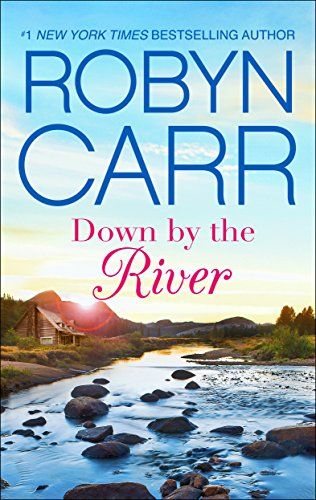 Down By The River

June Hudson is the town’s doctor, a caring, capable woman who now has a bit of explaining to do. People are beginning to notice the bloom in her cheeks—and the swell of her belly. Happily, DEA agent Jim Post is back in June’s arms for good, newly retired from undercover work and ready for new beginnings.

Expecting the unexpected is a way of life in Grace Valley, and the community is overflowing with gossip right now. Who is the secret paramour June’s aunt Myrna is hiding? Does the town’s poker-playing pastor have too many aces up his sleeve? But when dangers, from man and nature, rise up with a vengeance to threaten June and the town, this community pulls together and shows what it’s made of. And Jim discovers the true meaning of happiness here in Grace Valley: there really is no place like home.

Dr. June Hudson awoke to the ringing of the phone. It was still dark as pitch, but when she rolled over to look at the clock it read six-fifteen. She’d slept in, it seemed. She clicked on the cordless. “June Hudson.“

“Who was that man?“ her eighty-four-year-old aunt Myrna wanted to know.

June glanced over her shoulder at the man in question. Jim. He yawned largely and began to scratch his chest. Ah. So she hadn’t dreamt it after all. He was here, beside her, in the flesh, after being away so long.

Aunt Myrna wasn’t the only one who knew nothing at all about her secret lover. With just a couple of exceptions, the whole town had been kept in the dark. She was going to have a lot of explaining to do.

“His name is Jim and I’m going to bring him over to meet you the first chance I get, Aunt Myrna. Hopefully this very morning. You’re going to approve, I promise.“

I haven’t figured that out yet, June thought. “Later, darling. There are too many details and I have to get ready for work. I’ll see you soon.“

She disconnected and returned the phone to the bedside table. This time when she looked at Jim, she shook her head and sighed, but she smiled. The phone rang again. “I’m not on call,“ she said. “We’ll let the machine pick up.“

He lifted one brow, amused. “Too many details?“ he mimicked.

“Yes, and we’ll probably have to make them all up.“ She jumped out of bed, naked as the day she was born. “I’m going to shower. Would you listen to the messages, please? If anyone calls for emergency assistance, bring me the phone. Okay?“

From the kitchen came the sound of June’s father’s voice, lifelike enough to make her flinch and grab for the sheet to cover up. Elmer Hudson was one of the exceptions who knew, but he didn’t know everything. “Well, you’ve really stirred up a hornet’s nest this time, haven’t you?” Elmer asked, then laughed his wheezy laugh. “I think I’ll take my coffee at the café this morning, just to be on hand if there’s any excitement.”

“A laugh a minute.” June made a face. “See if you can think up a good story while I shower.”

While she waited for the hot water, she looked at her profile in the mirror. Her waist was fast disappearing.

A year ago she was the thirty-seven-year-old town doctor, single and without a prospect in sight. Six months ago, though she had a hot prospect, she was pretty sure she’d be childless. A few months ago, her prospect became even more serious and words of love were said along with desperate goodbyes. Two weeks ago her tummy was reasonably flat, but the moment she found out she was four months pregnant, her middle began to strain at her waistband. Then, approximately the second Jim returned home for good, home for her, she blossomed. Now she had a nice little round belly growing.

Last night, as the weekend Harvest Festival was breaking up and the last revelers were dancing, he appeared out of nowhere. It was as though the entire festival, the entire town had disappeared, and it was only the two of them, embracing, touching, kissing. And then, without making any proper introductions, they’d gotten out of there as quickly as they could. But how naive. The town hadn’t disappeared; the town had watched.

She heard the phone ring again and knew the whole town was going to call her this morning, asking for the facts. She should probably be grateful they hadn’t started calling last night.

The actual truth—which they wouldn’t be telling anyone—was that June had met Jim last spring when he brought a wounded man to her clinic, late at night, wearing a disguise, and held a gun on her while she removed a bullet from his comrade’s shoulder. Call it intuition, but she had never quite believed this big handsome man with the beautiful sparkling blue eyes could be a criminal, though he certainly appeared the part. Shortly thereafter, right about the same time she fell helplessly in love with him, he admitted the truth—he was an undercover DEA agent, working inside a cannabis farm deep in the mountains, a farm they were getting ready to bust. After the raid, Jim was sent on one final assignment before retiring from a successful career in law enforcement. Neither June nor Jim realized they already had a baby started.

June, a small-town doctor raised by her father, the town doctor before her, was always busy thinking about the health and welfare of other people. Even though she’d been nauseous, sluggish and suffered through crying jags—something she’d never before experienced—she hadn’t suspected a thing. By the time she described her symptoms to her business partner, John Stone, she was well along.

She got out of the shower and, while toweling dry, went into the bedroom. She wrapped the bath sheet around herself. Her wet hair hung in dripping curls to her shoulders. “Remember just before you left on that last assignment, I told you I thought I probably couldn’t have children.”

“I remember,” he said, giving his head a nod. He was sitting up in the bed, sheet to his waist, and he held a cup of coffee. June’s collie, Sadie, who was not allowed on the furniture, was curled up on the bed at his feet.

When she lifted her head to regard June, she seemed to have taken on regal airs. “Shows what you know,” he said.

“I was already pregnant. I just realized that.”

“For a doctor, you don’t pay such close attention to details.”

“Well, about other people I do. You made coffee?”

“Uh-huh. And squeezed Sadie over the grass and gave her breakfast.”

“You just might come in handy. But before you get too comfortable, you’re going to have to come into town with me. You need to meet a few people. We don’t have a lot of time to waste.”

She slowly opened the bath sheet. There it was, a protuberance that, much too soon, would be screaming for her supper. His eyes grew warm as they caressed her new shape. “It’s time you met my family and friends,” she said.

“Maybe you should take the day off,” he suggested. “We could go to Reno or Lake Tahoe. Get married.”

Suddenly, inexplicably, she felt her face grow hot. Married? Right away? What did she really know about him, besides that she loved him madly and he snored? So much was still a mystery. She wasn’t about to marry him before she had a few more details.

But she wasn’t about to start their relationship off on the wrong foot, by refusing his very chivalrous suggestion. She leaned across the bed and gave him a quick kiss. “It’s too late to be coy, Jim. Tell me, how are we going to describe our…courtship. As it were.”

He rubbed her cheek with the knuckle of his index finger. “I’ve found that the fewer the number of lies, the less complicated the cover. So, try this. I used to work in law enforcement back East and am retiring here, out West. I met you early last spring when I happened to be in the area and gave a friend a ride to the clinic for medical treatment for a minor injury.”

“But he was a criminal! A drug farmer!”

Jim shrugged. “Yeah…but we were friends. Or so he thought.”

“Ah, so that’s how it works,” she said. She sat on the bed, her legs curled under her, like a girl waiting for more of the story. The phone rang and they both paused and listened. Into the machine they could hear Dr. John Stone. “Hi, June. Just wondered if you’re taking the day off. Or at least the morning. I can handle the clinic alone if you have…ah…other things to do. Heh-heh-heh.”

“Smart-ass,” she said to herself. Then, “So, Mr. Post, what kind of law enforcement?”

“In twenty years…a little of everything. In the last few years, more paperwork than anything else.”

“And what have you been doing out here?”

“Scouting around for a place to settle. Grace Valley might have been a contender even if I hadn’t fallen for the town’s doctor.”

“You know,” she said, impressed, “you’re very good at this.”

He leaned toward her. “I’m a professional. Or was.”

“How am I going to know when you’re lying to me?“

He reached for her and, putting his large hand on the back of her neck under her wet hair, pulled her to him. He kissed her gently. “For some reason I can’t explain, you have always known the truth about me. The only other person with whom that is true is my sister, Annie.” He smiled. “I feel differently about you than I do about her.”

“Well, that’s a relief.” She bounced off the bed. “You can have the shower. And hurry up. Let’s get going before the town has any more fun with this.”

June and Jim rode toward town in her little pickup truck. Sadie usually had the seat Jim was occupying, and June wouldn’t even talk about putting her in the back, so Sadie was squished between them. June dialed up John on her cell phone.

“I just wanted to let you know I’m on my way into town and I’m bringing my…my…I’m bringing Jim with me so everyone can look him over and give him the stamp of approval.”

“Why, June,” John said, feigning hurt. “I’m sure the man of your choice is none of our business.”

“I wish,” she answered, and laughed in spite of herself.

June slowed as she came around a curve and encountered a disabled truck up on a jack by the side of the road, its left rear tire missing. The vehicle was old and overladen with bundles, boxes and a couple of child-size mattresses. Two little kids, either girls or boys who hadn’t had haircuts in forever, stood behind the pickup. They were ratty-looking and dirty and wore forlorn expressions. They didn’t wear jackets, though the early morning air was cold. If they were underdressed, there was a good chance they were also underfed.

There was no tarp to cover the family’s goods and the sky was threatening. It was October and soon the rains of winter would begin and not ease up until late spring.

A family of modest means, all their worldly goods loaded in a truck, trying to find a place to start over, was not an unusual sight on the roads surrounding the valley. With the cold weather came the cessation of logging and a slowdown in construction.