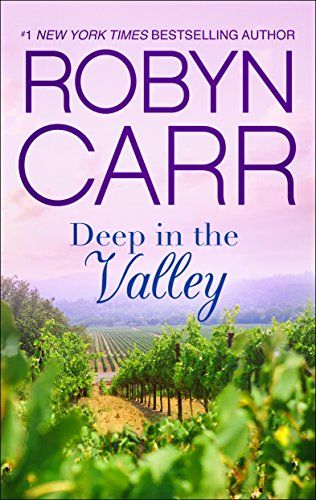 Deep In the Valley

Welcome to Grace Valley, California— where blood runs thicker…ties are stronger…and love is all the more sweet.

Visitors to the town often remark about the valley’s peace and beauty—both of which are plentiful. Unlocked doors, front porches, pies cooling in the windows—this is country life at its finest. But visitors don’t always see what lies at the heart of a community. Or just beyond…

June Hudson grew up in Grace Valley, the daughter of the town doctor. Leaving only to get her medical training, she returned home and followed in her father’s footsteps. Some might say she chose the easy, comfortable route…but June knows better.

For June, her emergency room is wherever she’s needed—or wherever a patient finds her. She is always on call, her work is her life and these people are her extended family. Which is a good thing, since this is a town where you should have picked your husband in the ninth grade. Grace Valley is not exactly the place to meet eligible men—until an undercover DEA agent suddenly starts appearing at all sorts of strange hours.

Everybody has secrets down in the valley. Now June has one of her own.

June stood in the shower a little longer than usual, preoccupied with a conversation she would have later in the day. She was the town doctor in Grace Valley, California, a post she had inherited from her father, Elmer “Doc” Hudson. Elmer was seventy-two and playing at retirement, which was a polite way of saying he didn’t keep hours anymore but he stayed in his daughter’s business all the time.

The need for another full-time doctor to serve the town was becoming more dire every day. June had already talked to several physicians, and so far there hadn’t been a fortuitous match. But today John Stone, M.D., was going to interview. He was forty, had attended Stanford University and UCLA Medical, done his OB-GYN residency at Johns Hopkins, worked for eight years in a prestigious women’s clinic, then done a second residency in family medicine. He was made to order for Grace Valley. But was Grace Valley made to order for him?

She tried to picture him, a yuppie from Sausalito. He had probably passed through town while on a wine tasting tour and begun fantasizing about the good life here. The beautiful landscape—mountains, valley and ocean—seduced more and more transplants from the cities every year. Or perhaps he’d been on a family vacation, doing the bed-and-breakfasts up the coast. But no, she thought, maybe a rich friend from San Francisco had a huge summer place nearby, someone who didn’t need to eke out a living from the town. John Stone couldn’t have been drawn here for golf or sailing; there was nothing so refined as that around. Hiking and camping, maybe, but only for a true woodsman. So what’s he doing here? He’d say he was looking for peace and quiet and beauty and safety, all of which were plentiful in Grace Valley. Apple butter, heirloom quilts, unlocked doors, front porches and pies cooling in kitchen windows. Country life. Decency and simplicity.

He probably wanted to get his kids out of the dirty city, away from drugs and crime. How would he react to the news that the Coast Ranges and the Trinity Alps were so full of marijuana growers that army helicopters frequently flew just over the treetops, searching? The regular raids in the deep mountain forests made the simple sport of hiking a dangerous endeavor for the newcomer, since you never knew which camps and trails were controlled by drug farmers. Cannabis remained the largest cash crop in California. It was an uncomfortable reality, and it was just up the road.

As for peace and quiet, June was looking for a little of that herself. Her reason for trying to hire another physician. Obviously.

She turned off the water and began to towel her hair.

June had chosen to practice medicine in the small town she grew up in, knowing the challenge of it, knowing it could be more exciting than a city emergency room. She understood the inconvenience all too well—she lived it—and the sometimes discomfiting intimacy of being close friends with your patients, a thing big-city doctors could afford to avoid. So far all the medical contenders she had spoken to were trying to escape the hard work, long hours, over stimulation and constant demand of their city practices. Each had ultimately decided this wasn’t the place for them, for it was a trade-off, one kind of pressure for another, but no less exacting. It took a certain personality to take on the medical needs of a whole town.

That was another thing. There was no such thing as being “on call.” There was you. Period.

She reached for the phone, but the damn cordless didn’t work. Out of juice. She’d forgotten to plug it in again. With a towel wrapped loosely around her, and hair dripping in stringy tendrils to her shoulders, she made a dash for the kitchen phone.

The presence of strangers in the living room caused her to yelp in shocked surprise and dive behind the kitchen counter. Then she slowly rose and peeked over the counter into her small living room as the phone rang on. Had she really seen what she had seen? Four people —a man, a woman, two teenagers—boy and girl. The woman had a horrible scar running down the left side of her face. It took June a second to realize it was an old wound; the family had not come for help with that. They sat on her sofa, nice as you please, not in any way alarmed by her state of undress.

The phone continued to ring as she peered over the counter.

“You the doctor?” the man finally asked.

By their out-of-date clothing and questionable manners, June assumed they were from the back woods—subsistence farmers or mountain people. Since Grace Valley sat at the junction of three counties, it was impossible to tell which one they might be from. She didn’t recognize these folks; maybe they’d never before sought medical treatment.

“Got a problem with the boy, here.”

June tightened her towel and reached for the phone. “Excuse me,” she said to the family. “I’ll be with you in just a moment.” She slid down behind the counter again. “Hello?” she said into the phone.

“Hi there,” her father said. “I thought I’d better call and tell you that some family from back in Shell Mountain stopped George Fuller along the road and asked for directions to your house.”

“Well, what the hell was George thinking?” she whispered fiercely.

“I don’t imagine George thinks much if he can help it.”

“They’re here! Let themselves in and took a seat in the living room while I was in the shower!”

“I’m practically naked! I had to run to the kitchen phone, wearing only a towel!”

Elmer cackled, a laugh that had a slight wheeze to it, pipe smoking having taken its toll. “I bet they hadn’t counted on that.”

Elmer could hardly speak, he was laughing so hard. “Right now…I’ll bet…you wish…you’d plugged in that cordless phone for once.”

Her father seemed to have some simple psychic ability, a talent that did not amuse June at the moment. “Dad, if you see George before I do, tell him I want him to suffer before he dies!”

“You really need a dog, June. Haven’t I been saying so? You want me to come over?”

“What for? I can handle this now.”

“If I survive the day,” she answered, and hung up without saying goodbye. Elmer was going to get a kick out of this a lot longer than she would.

June made sure her towel was secure, then slowly stood and looked at the family. Dad wore a suit jacket that was probably thirty years old, and Mom wore a hat. They’d put on their Sunday best for a trip to the doctor, but it seemed like they’d had a hard journey. If the man hadn’t said his boy needed a doctor, June would have thought the woman was in some need; the scar that marred her face ran deep from her forehead to her chin, across a blind eye that drooped sadly. It looked as if she’d taken an ax in the head. It gave June a headache just to look at it, though obviously the wound was years old. A childhood accident, perhaps.

The boy must be in bad shape for them to come to her house. She saw he wore one boot and one clean sock. This did not bode well.

“Let me get dressed, then I’ll look at your son. Stay right there, please.”

So much for the peace and tranquility of country life.

Elmer used to see patients in their home. The office space wasn’t an add-on suite or anything like that, just two rooms right in the middle of the house, built that way by the first town doctor. And when a patient had come to the house wearing only one shoe, it had meant the other foot was too swollen. June’s training for spotting such things had begun in her childhood.

Her visitors were the Mulls; a family of very few words. June managed to learn the boy had been stepped on by a jenny—a female donkey. The flesh was torn and rotting, and there were an unknown number of broken phalanges and metatarsals. Country people usually did much better than this with their bone settings and poultices. Maybe the boy had some metabolic problem that affected his healing. She would see that he was checked for diabetes.

“You waited too long on this injury,“ June told the family, comprised of Clarence Mull, his wife, Jurea, and their children, Clinton, sixteen, and Wanda, thirteen. Clinton was a strapping, handsome youth. In Wanda, June could see a beauty that might have been the mother’s had she not been so tragically marred. Clarence and Jurea were not young parents; June thought they might be in their fifties. “You have broken bones in the foot, and tissue and muscle damage from walking on it. Not to mention the necrotic flesh around this gash. Didn’t it hurt?”

The boy shrugged. “Yeah, it was pretty bad. But Ma—”

“And I bet you gave him some serious herbal remedies for the pain—his pupils are dilated. You should go easy on that stuff.”

“Works good on the pain though, don’t it?” she answered.

“Too good. It was possible for him to walk on a broken foot and maybe do worse damage. Did you get to my house in a truck or car?”

“You think it could make it as far as either Ukiah or Eureka?“

He shrugged. “We’re slow but steady.”

June gently pulled the sock back over the blackened, swollen foot. “How slow?” she asked.

The boy answered. “Can’t get her up over thirty these days.”

“Well, I have a better idea,” June said. “Let me get one of the deputies to give you a lift up to Rockport, to Valley Hospital. You need to see a specialist.”

“I’ll get him where he needs to go,” Clarence said.

“We’re in a hurry now,“ she emphasized, going for the phone. “You already knew that or you wouldn’t have brought him here at six in the morning.”

“You worried that foot is going dead?” he asked.

June glanced back at him. A backwoods mountain man who could interpret necrotic tissue into a dead, gangrenous foot? Maybe he was only expressing his own fears. Still?

“I’m telling you, if you don’t get that boy to the hospital, he could lose his foot. Or worse. You wouldn’t want that.” 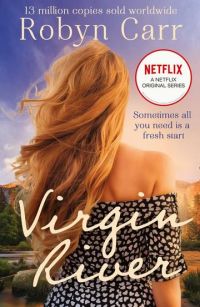 Robyn is giving away an autographed trade paperback Great Britain edition of VIRGIN RIVER to one winner!