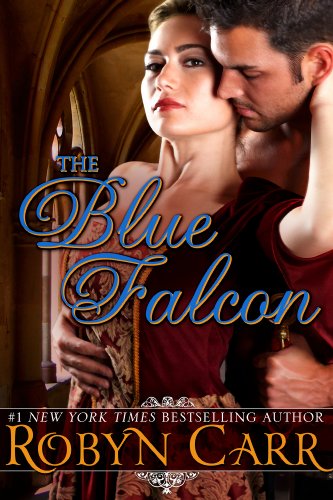 In love and war, some oaths are meant to be broken…

Riding into the arena under the furling blazon of the blue falcon, Sir Conan de Corbney accepts a token from the young beauty, Lady Chandra, sparking a romance foretold long ago.

That is, unless Conan’s mother can help it.

Colluding with her son’s rival, Sir Tedric, Lady Udele secretly arranges a more lucrative marriage for her son and weds him to Edwina—Chandra’s older sister—while Sir Tedric claims the fiery Chandra for himself.

Thus begins the star-crossed lovers’ quest, amidst treachery and betrayal, for the path back to each other’s arms. When a knight is pledged twice, once for loyalty and once for love, which oath will prove stronger?

From private chambers to the distant bloodstained shores of the Crusades under King Richard’s reign, THE BLUE FALCON is a timeless tale of adventure, treachery, and above all, an unforgettable love story.