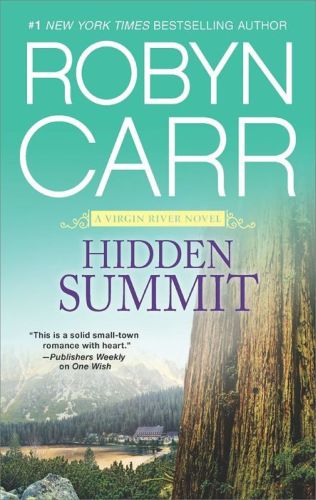 ROMANCE UNDER CONSTRUCTION…
Sick of running into her cheery ex-husband and his new wife, Leslie Petruso accepts a job at the Virgin River branch of Haggerty Construction and takes the high road right out of town. Now she’s got Paul Haggerty’s business running like a well-oiled machine. In fact, things are so busy Paul jumps at the chance to hire an extra set of hands.

Just like Leslie, Conner Danson has been burned by love. But if Leslie was disappointed by her relationship going bad, Conner was decimated. He’s got no time for women…although he spends an awful lot of time pretending not to notice Leslie. And she’s pretty busy “ignoring” the chemistry between them.

According to Conner and Leslie, they have only one thing in common—they’re done with love. But everyone in Virgin River can see that things are heating up at Haggerty Construction. And as far as Paul Haggerty can tell, the best thing he can do is hang on to his hard hat and watch the sparks fly!

Chapter One
Brie Valenzuela finished her large latte and looked into the empty cup. She’d been waiting in this coffee shop for over an hour, trying to look engrossed in her newspaper, but as the time ticked by she only grew more concerned. The man she was meeting was a witness to a murder and needed a place to hide out. She’d be hooking him up with a place to stay and a job in Virgin River as a favor to one of her colleagues from the Sacramento District Attorney’s office, and when a witness was late in meeting his contact, there was reason to be concerned.

Brie wanted to make a phone call to Sacramento, but didn’t. Instead, she asked the Barista for another latte.

This witness, now known as Conner Danson, saw a very well known, high profile Sacramento businessman shoot another man and toss his body in a dumpster. Danson was taking trash out to the dumpster behind his hardware store when it happened. He slipped behind the dumpster and saw everything; he called the police and became the only witness to the crime, although thanks to his prompt report, they found evidence of blood in the man’s car, though it had been cleaned, but no weapon. DNA proved the blood belonged to the victim. But, shortly after an arrest was made, Danson’s hardware store burned to the ground. And there was a threat left on his home phone voice mail while the store was burning. You stayed out of the heat this time, but you won’t slip by us again.

Clearly the suspect, Regis Mathis, known as a very distinguished pillar of the community, was “connected.”

Brie had served as an Assistant District Attorney with Max, officially Ray Maxwell, some years ago. Max was now the DA. He’d suspected some trouble with other witnesses’ anonymity and wasn’t sure whether the leak was in his office or the Federal Marshal’s unit, so to be on the cautious side, he set up his own program. He wasn’t about to take any chances on losing the key and only witness to a high profile murder. Virgin River with Brie involved was an excellent option.

It was another twenty minutes before the door opened and a man entered, but her first thought was that it couldn’t possibly be her witness. First of all, he was too young to own a prosperous hardware store that catered to custom builders — this guy was no more than thirty-five. And he was, for lack of a more refined description, hot. At about six-two, he was built like a war horse, his muscles almost popping into prominence beneath the white tee-shirt under his opened leather jacket. Wide shoulders, narrow hips, low-slung jeans, long legs. Although he wore a very unhappy expression at the moment, his face was perfectly symmetrical — square jaw, straight nose, thick brows and deep, dark blue eyes. He sported a very handsome, sculptured and tightly trimmed moustache and goatee.

He lifted his chin in her direction. She stood and he walked toward her. She opened her arms. “Give me a hug, Conner. Like we’re old friends. I’m Brie Valenzuela.”

He complied a little reluctantly, nearly swallowing her up in his embrace, she was so small. “Nice to meet you,” he said quietly.

“Sit down. I’ll get you a coffee. What’s your pleasure?”

“Got it.” She went to the counter, ordered, collected the coffee and returned. “So,” she said. “We’re about the same age. We could pass for friends from college.”

“I didn’t really go to college,” he said. “One semester.”

“That works. How old are you?”

“Aren’t you kind of young to own a successful business?”

“Used to own,” he said, his expression darkening. “It was my father’s. He died a dozen years ago but I was raised in that store. I took over.”

“I see,” she said. “So, we’re friends from college. You’re up here looking for something a little different after the builder you worked for in Colorado Springs shut down; there’s a complete script of your history in this envelope, though I’m sure Max went over all of it with you.”

He gave a nod. “As well as all my new ID. I picked up the truck this morning in Vacaville.”

“I reserved you a small cabin. Very small, but comfortable. It’s going to be temporary, so say it’s just until you find out if you like it here. And a friend of mine, Paul Haggerty, is a builder. He’ll give you a job — he can keep you on through summer if necessary, it’s his busy building season. That gives you six months, but you won’t need that much time. I hope.”

“Who knows about me?” he asked her.

“My husband, Mike, and I. And you want Mike to know. He’s not just a small town cop, he’s a very experienced LAPD detective. Otherwise, you’re completely anonymous. And seriously, I’m sorry you have to go through this. But on behalf of the state, thank you for agreeing to testify.”

“Lady, don’t thank me. I am out of choices,” he said. “And don’t stand anywhere near me in a thunderstorm because I am like a magnet for lightning. My life has gone straight to hell in the last year.”

Brie frowned. “Don’t call me lady,” she said. “My name is Brie and I’m helping you. Show some gratitude. You’re not the only person alive to have a little bad luck; I’ve had my share. Now, I have a new cell phone for you. Here’s a number — you can touch base with your sister who also has a new cell phone. The area code for both phones is in Colorado Springs and the DA’s office is picking up the tab. You can keep in touch with Katie this way. You won’t get reception in the mountains, forests or town of Virgin River, but while you’re out on construction jobs in clear areas or around here, in Fortuna, you’ll have reception. And in here,” she said, sliding him the large envelope, “directions to the Riordan cabins and to Paul Haggerty’s office. Also, directions to a little bar and grill in Virgin River — good food. Do not get drunk and spill your guts or you’ll probably just be moving again. If you live that long.”

“More’s the mercy,” she muttered. “If you need anything, call me at this number. Do not call the DA. He’ll call you or contact you through me. This is serious, Conner. You don’t have any options. Whether you agree to testify or not, the man you witnessed committing murder obviously has the means to have you taken out. The authorities have always suspected he’s that kind of man, even though he appears on the surface to be quite upstanding.”

“Understand something,” he said to Brie. “If it weren’t for my sister and nephews, I might just go up against him because A — I’m that kind of man and B — I’m a little past caring.”

“Your sister could be collateral damage, just being related. I know you’ve been told but I’m telling you again. When you speak with your sister, no clues about where you are. Don’t discuss the time zone or weather or landmarks, like redwood groves. I’m sure we’re secure but there’s no point in taking chances. Let’s get through this whole. Hm?”

He sat back. He lifted his coffee cup. “Yeah,” he said sullenly.

“Get settled into your cabin. Go see Paul and get your job. When you’re comfortable, I’ll have you to dinner. Maybe talking with Mike will settle your nerves a little.”

“Can I just remind you that this is all gratis? A favor for an old friend? No one’s getting paid for this! I’m sticking my neck out for the DA because he’s a good man and I owe him! Go the extra mile and try to be pleasant! Seriously — I don’t need the irritation! I have a family. I was an ADA in Sacramento but now I’m freelance up here and I have a husband and a little girl, not to mention a lot of close friends!”

She put her hand over his in what might appear as a gesture of friendship to the casual observer, but her voice was firm. “I’m sure it’s been hell. But we have a mission here. You’re a friend from college, remember? And I don’t need my brother and my close friends wondering why the hell I’d find you a place to live and a job because you’re such an ass! So—”

“I came up here to hide out while I was getting ready to testify against a rapist. I stayed after the trial.”

“Me,” she said. “First he beat conviction — I was the prosecutor. Then he raped and tried to kill me. So, you can assume I understand some of what you’re going through…”

He was quiet for a long moment. He had been the primary support of his sister and nephews for a few years now. He couldn’t help but wonder how he’d feel if she had gone through something like that. It turned his stomach. Finally he swallowed thickly and asked, “Did you get him?”

He let out his breath. “Good for you.”

“This goatee,” she asked, running her fingers over her own upper lip and chin. “Is it new?”

“A slight change was suggested,” he said. “New.”

I see. Well, I understand you’re going to need some time to adjust. Even though you haven’t done this before, I have. Give me a call if you get antsy. For right now — try to enjoy the area. It’s incredibly beautiful. A man could do worse.”

“It was awful. And behind me now, as this will be behind you. You can get a fresh start. Um, Conner? Listen, you’re not a bad looking guy but this wouldn’t be a good time to hook up, if you get my drift.”

“Good. I guess,” she said, standing. “Hug me. Like old college friends.”

He opened his arms. “Thanks,” he said roughly.

Conner Danson—a 35-year-old, successful business owner in Sacramento, Conner is an unwilling witness to a violent crime. He is in Virgin River trying to keep a low profile until the trial.

Leslie Petruso—Burned by love, 32-year-old Leslie moves from her hometown of Grant’s Pass to Virgin River to put her cheery ex-husband and his new wife out of her mind.

Katie—Conner’s younger sister. A military widow and mother of twin boys, Katie is forced to move across the country, away from Conner, who is her main support and the boys’ only male influence.

Candace and Robert Petruso—Leslie’s parents, 60-something, retired and a fun-loving couple.