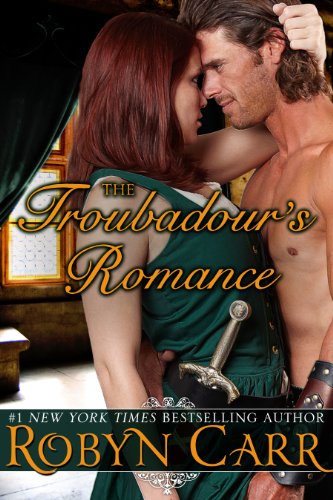 Spurred on by her flirtatious manner and rumors of her dowry, knights brandish their swords for her hand in marriage, but King Henry II has already decided her fate—His royal command gives her hand to Sir Royce Leighton, the scarred and brooding lord of Segeland, in order to seal a political alliance. Despite a tempestuous beginning, their arranged marriage gives way to desire, and Royce’s bitter memories are soothed by his alluring young wife.

However, the King isn’t finished plotting, and old suitors seek revenge. Felise and Royce must weather enduring court scandals, but will their love be enough to survive the cruelest of betrayals?

Set in 12th century England, THE TROUBADOUR’S ROMANCE is full of political intrigue, greed, and passion and is sure to dazzle Robyn’s fans.