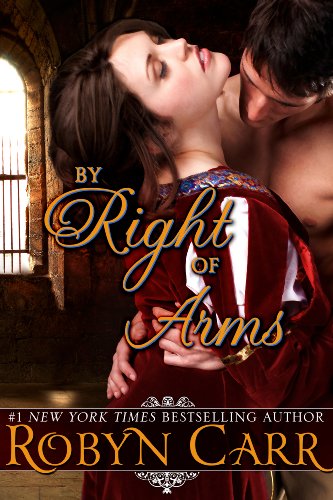 By Right of Arms

The Black Prince of England hungers to capture the lands of France, and Sir Hyatt Laidley is just the knight for the task. In exchange for years of faithful service, Hyatt will receive both land — and lady — of De La Noye in Aquitaine.

When Hyatt and his men attack, both Lord and castle fall, but the young and newly widowed Aurelie is not so easily conquered. Impassioned by the subjugation of her people, Aurelie pledges to forever honor her late husband. She may be condemned to marry the English bastard, but her heart will never yield!

But to Aurelie’s surprise, Hyatt proves to be everything her former husband was not. Fearless, wise, and devastatingly handsome, he makes for a highly gifted Lord and protector. And try as she might, she simply can’t feign indifference to her virile husband’s passionate embrace.

Yet Aurelie is not alone in her emotional torment. Previously robbed of his inheritance and title by a deceitful stepmother, Hyatt can’t bring himself to trust his French wife. But as rivals threaten the welfare of their people, the couple must decide which bond is stronger—allegiance to one’s motherland or ties forged from love.

Full of danger, lust, and love, BY RIGHT OF ARMS is a smoldering medieval romance set in 14th century France that is sure to enthrall fans of VIRGIN RIVER.